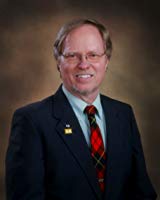 Linebaugh Public Library is pleased to host local author Jim Sandman for a book signing on Saturday, October 24, from 10 a.m. until 1 p.m. Sandman will be signing copies of his book, Heaven Is Like Eternal Sex: And Other Things You Really Desire - 18 Daily Readings, published by CreateSpace Independent Publishing Platform in 2018.

What do you desire most - Love? Peace? Wealth? Adventure? Sexual intimacy? How about a good high? Super powers? To be the best you? Freedom? Do you have other longings? Would you like to have every deep-seated desire completely satisfied, and for eternity? You can! You were meant to. But you have a choice to make. And the offer has been available since the beginning of time. This book will point you to the answer.

Sandman was born in Richmond, Virginia. He served in the U.S. Navy Submarine Service for twenty years and retired as a Chief Fire Control System Technician in 1997, having served on five submarines, including the USS Newport News which participated in Desert Storm. Since 1997, he has worked in the IT industry. Jim has an AA degree in Guitar Performance (Classical) from Tidewater Community College and a BBA in Computer Information Systems from Middle Tennessee State University. He is a member and past Chaplain of the Volunteer Base of the U.S. Submarine Veterans International, a member and Past Commander of American Legion Post 141 in Murfreesboro, and the current Registrar and Chaplain of the Stones River Chapter of the Sons of the American Revolution (SAR). In 2018, Jim was elected as State Executive Committeeman, 14th Senate District, Tennessee, to a four-year term.

Sandman is an avid student of the Bible, and loves reading. Heaven is Like Eternal Sex is his first book. He and his wife live in the Murfreesboro area.

Sandman will be selling paperback copies of Heaven Is Like Eternal Sex: And Other Things You Really Desire - 18 Daily Readings for $14. Mr. Sandman is donating 25% of his book sales from this signing to Linebaugh Public Library in memory of his good friend Comas "Chip" Montgomery, Jr. who recently passed away. Chip was an avid reader and lover of history and our country.